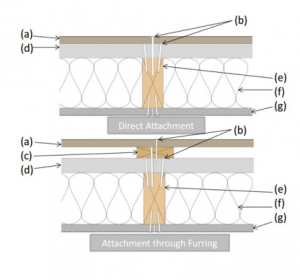 Vinyl wall coverings (vinyl laminated to paper or fabric) have become very popular over the last few years, largely because they are more easily cleaned than the uncoated open-textured types. Yet it is just this impervious, otherwise-desirable surface that sometimes creates a mould problem.

In one home examined by the Division of CSIRO, red and purple stains were found to be showing through from behind a light coloured vinyl wall covering within two weeks of application. The stains, which originated in the paste layer, were identified as a type of mould. The key factor in this rapid mould growth was the fact that paste had been sandwiched between a painted wall and a sub-substantial vinyl membrane.

On one hand, the impervious vinyl layer prevented evaporation of moisture from the paste layer while on the other hand, the painted background drastically reduced absorption of water into the wall. Thus, the paste was kept moist long enough for mould growth to start. Had an adhesive offering less nourishment to moulds been used, mould growth would have been unlikely. Similarly, had the wall covering been a plain paper or one of the “spongeable” wallpapers (papers with a very thin plastic film on the surface), or one of the “breathable” vinyls, mould growth would again have been unlikely since such coverings “breathe”, enabling the paste to dry by evaporation.

When hanging wall coverings of solid vinyl sheet laminated to paper, it is a wise precaution to apply a fungicidal wash such as two percent sodium hypochlorite solution to the wall before sizing it with a dilute solution of a cellulose adhesive with fungicide added. For best results manufacturers suggest applying lining paper to the wall before finally hanging the wall covering, using the heavy-duty cellulose adhesive for both operations. In the case of mould staining described above the vinyl wall overing had been hung, without a preliminary fungicidal ash, using a starch paste (instead of a cellulose adhesive) with fungicide added. Obviously this was not enough protection.

When the weather is very cold and damp the cellulose adhesive may take a long time to set, so an acrylic-reinforced latex adhesive might be advisable under such conditions, to avoid lifting of the seams. Alternatively, he cellulose adhesive could be used and, if the seams do lift, they could be bonded to the wall with the latex. When hanging wall coverings of vinyl sheet laminated to fabric, only the specially formulated adhesives recommended by the manufacturers should be used.

Normally, coverings are not hung on absorbent surfaces. Manufacturers recommend that bare surfaces be painted with a flat oil paint, and it has been assumed in the above that this has been done.

For now till next week when we will discuss

Any questions that our readers may have would be gladly welcomed and endeavoured to be answered as seen fit.