How to check “Water Hammer” in your pipeline? 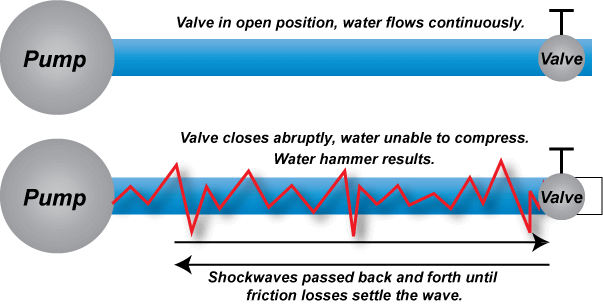 We had someone write in to us regarding a problem that some of us have experienced in the past and that is “Water Hammer”. What is it, why does it occur and how can it be remedied. We searched for a simple explanation, one that was easy to understand and we found this in an article written by Neville Rowe of Victoria, let me carry on.

As the increased pressure occurs in the pipe line and because water has the ability to transfer sound, the intense shock wave that is created travels along the pipe line creating a noise at some points in the pipe system.

In all plumbing systems the pipe work should be clamped on all on any bearers or joists where possible. Failure to do secure the piping allows the vibration and chattering the pipelines against the bearers or supports that the pipe is resting against.

The most common cause of water hammer in pipelines

The most common cause of water hammer in pipelines is the activation of washing machines, dishwashers, and most of the ceramic disk quarter turn tap ware. Theses items work in a manner whereby the valve or disk can be open and closed within a split second. This then creates the sudden increase in pressure or energy. As the energy travels along the pipe it dissipates in doing so the energy is transformed into sound in the pipe work. In some industrial applications water hammer has been known to fracture water mains.

In identifying the problem of water hammer several questions need to be asked. Where is the water hammer coming from? Which appliance, tap or valve is causing the effect? How many taps are causing the affect and in what part of the house are they?   What size piping is being used, and what is the supply pressure from the water boards supply mains?

Most people ask can we put a water hammer arrester on at the meter suppling water into the house.???

The most common arrester units available for domestic use are the 20mm units. As with all purchasable units there are brands on the market that have varying degrees of hydraulic pressure absorption.

Prior to commercially available water hammer arresters, long lengths of copper tubing were installed into the pipe work system, capped off at the end and filled with air, these acted as absorbers for some time until the pipe column filled with water and there was no longer any absorption qualities left, in which case they had to be re-installed with air.

These days there are many brands of water hammer arresters available, each one with different design configurations.

Some are designed with air trapped in a chamber and separated from the water with a rubber diaphragm see diag.1, here the trapped air must be maintained at a required setting for the unit to operate efficiently. In figure 2 the unit is made from pressed steel which encloses filled sacks of air that compress on sensing the pressure increase of water. Another design (figure 3) is a slim chrome plated steel unit with a piston and large spring to maintain an opposing pressure to the increase of the pressure in the pipe line. (Figure 4) shows a steel encased bellows membrane arrangement that expands and contracts against varying pressures. (In figure 5) a seamless copper cylinder uses an “o” ringed piston that absorbs the varying pressure separating the water from the air.

When purchasing a water hammer arrester one should look for a maintenance free unit, one that can stand high pressure working conditions, one that is suitable for hot and cold water and preferably with a 12 months or more warranty.

Some times other noises are encountered within the plumbing lines especially when taps are turned on , the valves in the taps themselves at times need adjusting or reseating especially if excessively high pressures are encountered. A licensed Plumber would be able to sort out most of those problems.