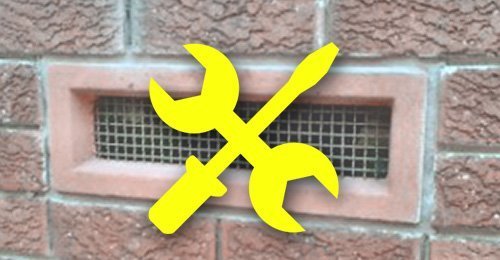 We will look at improving sub-floor ventilation which if not done correctly can be a cause of decay to timber components.

The other day we were asked to inspect an older style home in Nedlands it was a grand old mansion with timber flooring through out, massive ceilings space and it was oozing with old world charm. Generally the home was in good shape some of the roof timber were showings signs of sag and ageing but one room in particular was extremely cold, and it almost reminded me of the spooky stories one reads about cold rooms in haunted homes, but no such luck.
It turned out, after removing the inspection (male/female) opening in between the floor joists, it was obvious why the room was so cold.

For starters the distance between the ground and the floor was very close, the home was on a sloped block, and sub-floor ventilation was minimal. I will insert some data facts as supplied by CSIRO to us, on how to improve the subfloor ventilation with some interesting and commonsense applications, but you may well ask what has a sloping block to do with it. Well when water via rain is deposited around the perimeter of a house if the home sits on a flat block of land the water will seep into the ground vertically down. If the block is sloped the water that may pond in areas can and will flow down the hill and seep into the ground as it progresses down the incline of the land and hence we get damp and moisture under areas that would mot normally get damp on a level block.

Now the CSIRO Division receives an steady stream of requests for advise on prevention and correction of decay in flooring and in the majority of cases the problem is one of inadequate subfloor ventilation, that is for a free flow of air under all parts of suspended timber floors.

We shall take a case in point, where in a double brick dwelling circa(1920) most of the timber flooring had to be renewed. During the repairs the size and numbers of openings in the brickwork below floor level was increased because, with a few exceptions, the only provisions originally provided for ventilation was the openings in the brick work beneath the doorways. Before the new flooring was laid, extra openings were provided within one(1) to two(2) meters of every corner of every room and midway along any wall over five(5) meters long. Each of the new openings occupied the space of at least two bricks.

In addition because of the low sub-floor clearance and the difficulty of providing good cross ventilation, plastic sheeting was spread out over the ground and under all new flooring so as to reduce the area from which soil moisture could evaporate into the sub-floor cavity. Mortar droppings and other debris were removed from the inside of all external ventilator openings and finally the ventilators themselves were replaced.

Replacement of the ventilators was an essential part of the repairs.

Surprisingly the smaller of the original terracotta vents provided for rather more free airway than the double brick size, even though the latter had one more opening. However in practice, nether allowed for much air exchange between the subfloor space and the outside because the openings had been blocked by spiders and assorted debris. The pressed metal vents that were used to replace the original terra-cotta air bricks allow for about ten(10) times as much air flow through each opening. This together with the other measures taken should ensure that conditions conducive to decay do not develop again under that floor.

Adequate subfloor ventilation is also an essential requirement which is often overlooked when remedying the problem of excessive dampness in walls, by effectively ventilating all subfloor cavities, moisture that evaporates from the soil or the foundation is removed and the sub-floor humidity is prevented from rising. However achieving an airflow across or along the sub-floor space can be difficult in some houses, especially in terraces where there can be problems in providing vents at both ends of the house.

In case like that the Division often recommends the utilisation of disused fireplaces as a means of venting. If decorative facing is placed over the front of a fireplace openings cut through the hearth to the sub-floor space and a cowling or chimney pot placed on top of the chimney then a n up-draught will be created when the wind blows over the roof and air will be drawn from under the floor.

Any questions that our readers may have would be gladly welcomed and endeavoured to be answered as seen fit.