What causes condensation in houses? 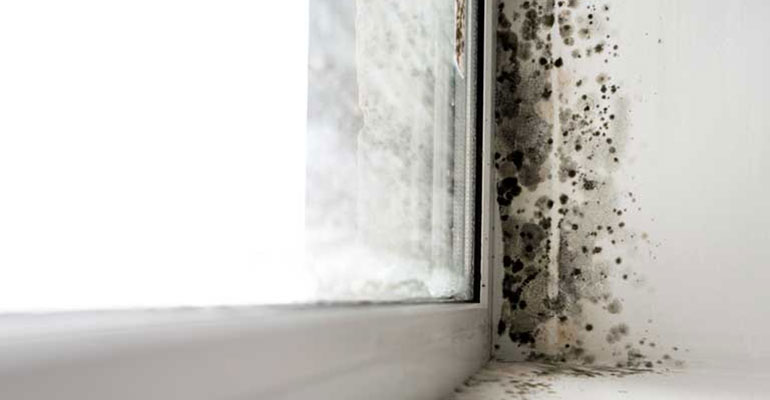 THE AIR AROUND US ALWAYS Contains A CERTAIN AMOUNT OF WATER VAPOUR BUT THE AMOUNT THAT CAN BE PRESENT AT ANY TIME DEPENDS ON THE TEMPERATURE OF THE AIR.

When moist air is cooled below its “dew” point that is (cooled to temperature at which it cannot contain all the water originally present) and if the cooling is caused by contact with a colder surface, then the surplus water appears as droplets on that surface, we call this condensation.

In real every day analogy it translate like this:- we hardly notice the air around us on an average day, then night time approaches, the temperature drops, and things become cold as the temperature drops, so does the air, if this dropping in temperature continues then the water vapour that occurs naturally in the air turns into water and if cold enough into ice.

Air in a house can become moister because the occupants and some appliances produce water vapor. Typical quantities of water vapor produced in a home are:-

Water vapor is also generated in large quantities by gas stoves/hot plates and kerosene heaters so much so that a lot of water may be stored in the air each day as water vapour.

On cold days much of this water will condense (if the ventilation rate is low) on cold window panes and even on walls. Little wonder then when some house holders complain of mold, decay and damp carpets.

Steam coming from service areas such as kitchens laundries and bathrooms travel to other rooms in the house, even if these rooms are a considerable distance away. The worst condensation problems generally occur in unheated rooms facing south which receive little heat from the sun. The movement of the water vapour within the air (using the air as a travel medium) travelling from service areas to other rooms such as bedrooms is due to the difference in water vapour pressure.

Severe condensation problems often occur in new homes as construction moisture is stored in the bricks floor etc. in addition to the moisture generated by the occupants. It will take about six to 12 months for the water to evaporate. Some of this moisture will be lost to the outside air by natural ventilation and much will find its way into other rooms in the house.

If moist air from the rooms is exhausted into the roof space, sever condensation may occur within the roof space causing costly damage to ceilings, roof members and insulation materials.

Technical information by courtesy of CSIRO.
For now till next week when we will discuss
“HOW TO STOP CONDENSATION IN HOUSES”
your “Handy Jock”.

Any questions that our readers may have would be gladly welcomed and endeavored to be answered as seen fit.